The stuff that happened after Thor: The Dark World's credits were certainly full of surprises. So the folks at i09 decided to chat with Marvel's Kevin Feige and director Alan Taylor about the two scenes during the end. 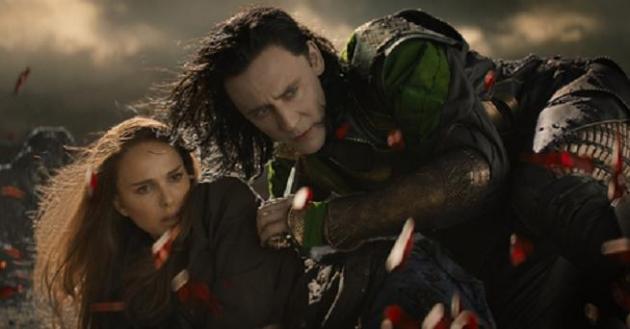 Obviously, you might want to skip reading if you haven't watched Thor 2 yet as there are a couple of spoilers ahead.

The big final kiss between Thor and Jane Foster felt like the Schwarma scene. Why wasn't that in the film itself?

Kevin Feige: It was. I would say it is in the film itself. Right?

It's a pretty long wait to get a really big kiss.

Kevin Feige:It felt strange to go from the Loki reveal to them kissing right away. That Loki reveal needed to slam out to the end titles and to give some breathing room. I sort of liked the notion that people that care about that relationship could go, "Wait a minute, what happened?" And then that's answered at the end.

Does this mean that Thor lives on Earth now, or are they going to do the long distance thing?

Kevin Feige: I would say that remains to be seen. But certainly the last place we him at the end is definitely Earth.

Why didn't you include the big kiss in the actual movie?

Alan Taylor: That was down to the wire, as a decision. For the longest time we thought we had to explain why Thor and Jane were together, or that they were together. We worked on this for a long and eventually it became a feeling that we know they're going to be together, it's implicit we know that. And once he turns down the throne, it's understood that that's the reason why. So we felt like this could be a coda moment, a feel-good moment rather than a plot point. It's also, we found, that once you filmed that moment with you-know-who on the throne, it's kind of hard to do anything after that. If we had another 6 weeks it may have winded up differently, but we didn't.

The Big Loki Reveal in the End:

[Because of the big Loki reveal of him as Odin on the throne] Is Loki going to become the main engine for villainy for the rest of the Thor movies?

Kevin Feige: I don't know, I think anything is possible… I think It always will depend… In some way, and this gets really nerdy, we look at the development of all of our movies in these phases. We've talked about this before. [Before] The Avengers [was] phase 1. We're in phase 2 right now, that's sort of the over-arching story lines. Some day people can look back at phase 1, phase 2, or phase 3, however long it lasts, and see a whole cinematic universe. But they can also look at the individual franchises and see arcs and turns. And in a strange way Thor, Avengers, and Thor: The Dark World is a Loki trilogy, which I think is cool. In charting the relationship of these two brothers, when we first meet them as little boys listening to a story their father [tells them] that they were both meant to be kings. Which ended up not being true for one of them, and seeing where that takes him in that troubled journey that Loki goes on.

Is it safe to say that Odin is dead now?

Kevin Feige: I would not say that it's safe to say, no. I don't know what Loki did to him.

The Guardians of the Galaxy Tease:

You're basically blowing The Collector's cover in the introduction scene at the end of Thor 2. Why? [By showing him wanting all of the Infinity Stones]

Kevin Feige: Well, I don't know how much of a cover he had. We look at it more as an introduction. In the same way that perhaps people who stayed through end credits of Iron Man and thought, "what is Sam Jackson doing with that eye patch?" In the same way people will "go what the hell is Benicio del Toro doing there?" And have someone educate them that this is The Collector from Guardians of the Galaxy. It also was legitimately meant to wrap up the ether [from Thor 2], and to sort of put that storyline away for the body of this film. It acts both as a capper for this [storyline], and a set-up for where we can go in the future.