The Differences Between Marvel's Thor And Norse Mythology

First of all, we know that it's only a movie. But that still doesn't give Stan Lee and Jack Kirby an excuse to totally revise the history of the Norse god.

Given that the originals were full of murder, mayhem and weird sex, the comic version of these myths are considered pretty tame. 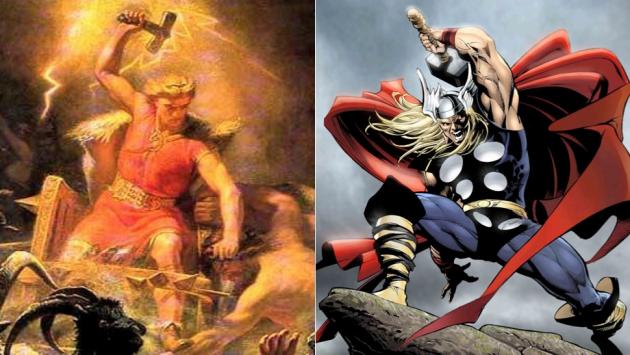 Here's a quick list of the major differences between the comics and the original myths about Thor and his world:

Marvel’s Thor is a blond, mostly clean-shaven man who speaks like an extra from a Shakespearean play. The original Thor had red hair, a beard, and most likely did not speak English of any sort.  He also loved battling so much that he could have been considered more of a supervillain.

The original Norse god needed magic gloves to have Mjonir fly back to him, and a special belt to use Mjolnir at its full power. Marvel's Thor used the belt in the alternative universe Ultimates comics, while the gloves have not been mentioned in the regular Marvel Universe at all.

The original Thor can’t fly, but has a flying chariot drawn by goats named Toothgnasher and Toothgrinder. While they have appeared in the comics occasionally, Thor mostly flies around hanging on to his hammer.

Marvel’s Thor falls in love with human Jane Foster. In Norse mythology, he ends up marrying the warrior goddess Sif (and cheats on her). Finally, original Thor was never punished by Odin to walk the earth as the lame doctor Donald Blake.

In Norse mythology, while Odin did find Loki as a baby after killing his giant father, he never adopted him.

Loki was actually just a god of mischief who liked playing pranks on his fellow gods, sometimes to insult them, but many times as a way of helping them.

In Norse mythology, Loki gave birth to many bizarre gods and monsters including Hela, the death goddess; the dragon Jörmungandr; and Odin’s eight-legged horse Sleipnir. Try to picture that the next time you gawk at the hotness that is Tom Hiddleston.

The original Baldur was the god of light, happiness, beauty, and all that good stuff, making him probably the closest thing that Norse mythology actually had to a true good guy.  The Baldur of the Marvel comics is just a hot-headed and less powerful version of Thor.

In both scenarios, all the gods love Baldur, except Loki who really hated the dude. And he even managed to murder the guy that involved disguising himself as a woman.

In the comics, Sif is a badass warrior who crushes on Thor. The original Sif was already Thor’s wife and also the goddess of the harvest.

She also had long blonde hair that got cut off in a prank by Loki, at which point her husband Thor beat the living shit out of him until he agreed to make it right.

If Odin of Norse myth and Marvel-Odin ever met in real life, the latter would probably get his ass kicked.

While Marvel Odin is the wise, peace-loving father, the original Odin was a war-god who didn’t give two shits for justice, law, or peace.

Original Odin was fickle and cruel, traded his left eye for magic, and was a high shaman called a seidr.  Marvel Odin traded all this for a vague but massive power called the "Odinforce," that lets him do anything but also needs to be recharged every so often with the "Odinsleep."  Something tells us that the Marvel writer in charge of Odin didn't really care about sticking with history.

In Norse mythology, no one is ever completely good or bad. Stan Lee had to make a couple of characters up. This includes hero Warriors Fandril, Hogun and Volstagg; and villains like the Enchatress, Skurge, Malekith the Accursed, Kurse, and more.

In the comics and movies, the Frost Giants are portrayed as just evil trolls bent on the destruction of Asgard.

The original Frost Giants, a.k.a. the Jotunn, have a far more complicated backstory. They originated from their father Ymir’s armpits and feet. They were powerful and wise, and Odin initially approached them to learn more about Ragnorak.

These giants were also the source of the universe’s poetry, which Odin ended up stealing  by drinking and spitting it back at Asgard. We told you Odin was an asshole.

The Asgard of Norse myth and of Marvel comics are pretty similar: They both are part of the world tree Yggdrisil, they’re both connected to the other realms by the Bifrost Bridge where the gods dwell.

But when it comes to the end of the world, the two versions are vastly different.  In the myth, pretty much everybody dies when Ragnorak begins, while it’s happened plenty of times in the comics without the world even ending once.
﻿
Six Christmas Movies to Watch at Any time of the Year