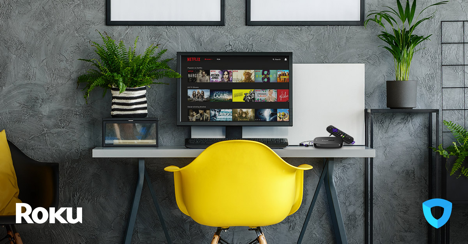 Roku comprises of a series of digital media players by Roku Inc. Along with Chromecast and Firestick, the Roku box offers another great alternative for streaming video on TV. It works for both free as well as paid platforms such as Hulu, Netflix or Amazon, which are preloaded in Roku.
Roku enables you to watch free as well as paid video content on your TV through internet. Streaming services such as Netflix, Amazon, BBC iPlayer, Hulu etc. and more are pre-loaded on Roku just like most apps come loaded on the smartphones.
Roku offers Roku Express, Roku Express+, Roku Premiere, Roku Premiere+ and Roku Streaming Stick – each option optimized as per the user’s budgets. But you can watch Netflix on Roku with ivacy vpn
Little Known Roku Features:
Here are some Roku features that you may not have known about or used before:
1. Talkative Roku:
You can talk to Roku in a way that is somewhat similar to how Google Assistant, Apple’s Siri and Amazon’s Alexa work. However, to make it work you must have a Roku voice remote and the Roku mobile app.
Here is how you can talk to Roku:
1- First of all, launch the Roku app
2- Tap Channels or the “Play” button from the end of the screen
3- Tap the magnifying glass on top of the screen to go to the search page
4- Tap the microphone icon to give search commands
5- Speak clearly into the mobile device in an audible volume and tap in the middle of the screen when you are done.
2. Auto Volume Leveling:
Auto volume leveling is another great feature offered by Roku. Usually, when you are in the middle of a certain show, and have set the volume as per your comfort, be it high or low, often times a commercial that is too loud, ends up shattering your peace. However, Roku OS 9 has auto volume leveling which mitigates such disruption. However, this feature can only be turned on while you are streaming.
3. Private listening
Have you ever stopped listening to music because you didn’t want to disturb the others around you? Ever compromised on your revered binge watching sessions because it was getting too loud? Roku’s Private Listening has been designed to deal with just those kind of problems. You can turn the volume up as much as you would like, while managing to keep calm for the others around you through this feature’s noise cancellation. This feature is available on both iOS and Android apps of Roku.
Watching American Netflix on Roku with a VPN!
The American version of Netflix happens to have the biggest catalog of TV shows and movies. But the problem is, people outside USA cannot access it due to copyright related restrictions. The only solution is a reliable VPN that not only unblocks Netflix but works well with Roku too, for instance Ivacy VPN. The sign up process is relatively easy and it sports speeds that are way higher than what others have to offer.
﻿
Super bowl 2021-The Weekend