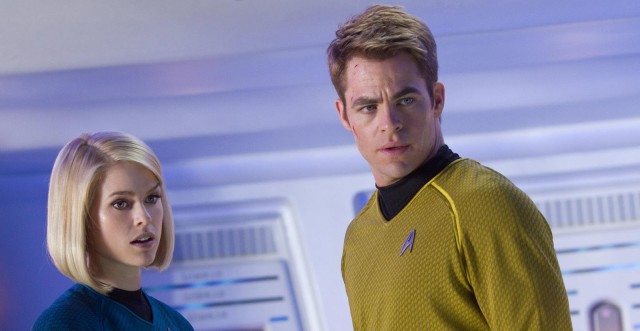 Star Trek Into Darkness' DVD/Blu-ray release was somewhat feature light, and it didn't include any deleted scenes. Now those scenes have turned up somewhere else and you can read descriptions of them.

Trekcore reports that if you purchased copies of the DVD through the xBox video store, you can use the xBox SmartGlass second-screen app to view a ton of deleted scenes.

Trekcore doesn't have the actual clips of those deleted scenes — and they appear not to be online anywhere else, either — but there are some detailed descriptions.

There's a longer version of Kirk's discussion with Pike after Kirk is reprimanded. Carol Marcus explains her random British accent. Uhura has longer conversations with the Klingons. The fight scene on Kronos is much longer. Kirk meets the little girl saved by Khan's blood.

Then there's Scotty getting aboard the Enterprise killer ship where he talks to himself:
SCOTTY
This is... shuttle Copernicus. I have the...

He thinks hard, clearly not used to this kind of improvisation.

SCOTTY
...hull plating and the coffee cells for the food synthesizers.

His face bunches up in anticipation for getting caught.

STATION COMM
Shuttle Copernicus, we do not have you on our registry.

He regroups, and tries a more direct attack.

SCOTTY
What the hell do you think I'm doin' here? Huh? You think I just happened upon an enormous box and thought I'd take a wee look? No! I've got a job to do! I can go back, if you like. Just give me your name, I'll tell 'em who sent me.

A long pause. He's sure the game is up.

STATION COMM
Supply shuttles, you're clear to enter. You too, Copernicus.
Read descriptions of the other deleted scenes over at Trekcore.
﻿
Hub4u Dubbed Movies Download - Is it Illegal?