Wheels Don't Have to Be Circular to Work [SCIENCE]

All-in-one Oil and Vinegar Dispenser Separates The Two in One Device Nov 13, 2013
LEFE BACK STAGE  oil

This Jacket Will Vibrate and Let You Know When and Where to Turn [VIDEO] Nov 12, 2013
LEFE BACK STAGE  navigate jacket

Here's What An 'Invisible' Bike Helmet Really Looks Like [VIDEO]

This Color-Capturing Cube Lets You Capture All The Colors Of Rainbow [VIDEO] Nov 12, 2013
LEFE BACK STAGE  Design

Everyday Things That Are Now Rendered Useless Because Of Smartphones [VIDEO]

Everyday Things That Are Now Rendered Useless Because Of Smartphones [VIDEO] Nov 11, 2013
LEFE BACK STAGE  smartphones

An inventor named Herman Casler came up with a device that animated still images using a hand cranked winch. This was in 1894. He probably didn't know that his device would still be used today to animate digital files instead. This is The Giphoscope.

Officina K dusted off the old invention and gave it a modern touch up. It is still basically the same device - it has an aluminum ring that holds a few hundred still photos, but instead of normal pics, the images are derived from GIFs.

You can order one from Officina K's collection (Public Domain Review also has some fun Muybridge and Edison ones for sale), or you can commission them to make one based on a GIF you supply yourself. 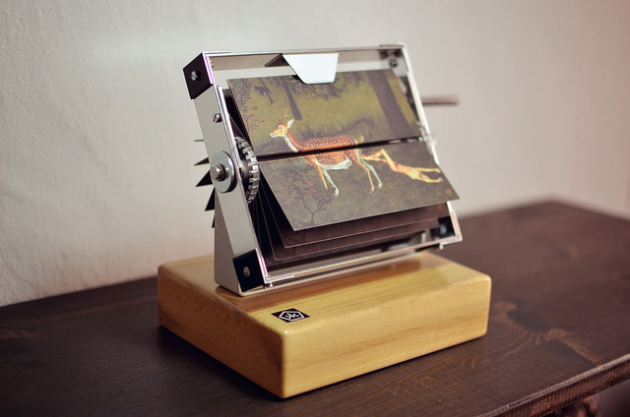 Check it out over at the links: [The Giphoscope via @nicolatwilley]
﻿ More Stories >