Neighbor Dishes Fat Shaming Letters Instead Of Candy, Ruins Halloween For Everyone

Imagine being excited to go trick or treating for the first time. But instead of receiving any treats, the person stares you down before handing you this letter for your parents. 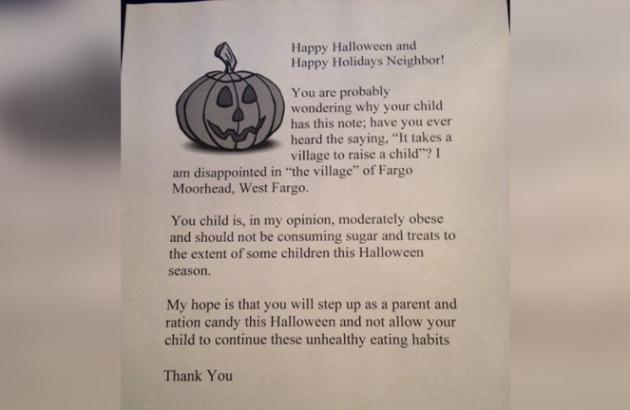 This letter is just one of many reportedly being handed out by a lady in North Dakota, who has decided to take it upon herself to pass judgement on any trick-or-treaters she considers as "moderately obese." An excerpt from the letter reads:
"You are probably wondering why your child has this note,"

"Have you ever heard the saying, 'It wakes a village to raise a child'?"

You (sic) child is, in my opinion, moderately obese and should not be consuming sugar and treats to the extent of some children this Halloween season.

My hope is that you will step up as a parent and ration candy this Halloween and not allow your child to continue these unhealthy eating habits.
Once word of the letters began to spread, the lady who identified herself as "Cheryl" phoned in to a local radio station to explain her reasons for ruining Halloween for chubby kids everywhere:
"I just want to send a message to the parents of kids that are really overweight,"

"I think it's just really irresponsible of parents to send them out looking for free candy just 'cause all the other kids are doing it."
An assistant professor of Clinical Psychology has since spoken with the radio station explaining that the letter will likely do much more damage than any good by singling out children who are desperately trying to fit in. The professor also noted that it's impossible to judge someone's health "just by looking at them."

Not sure what made this woman think she was fit to pass her own judgement on other people's kids. If she was really concerned about their health, wouldn't an apple have sufficed?