The footage was shot offshore of Vancouver Island, British Columbia, Canada, where naturally occurring methane seeps from the seafloor through cracks and faults. 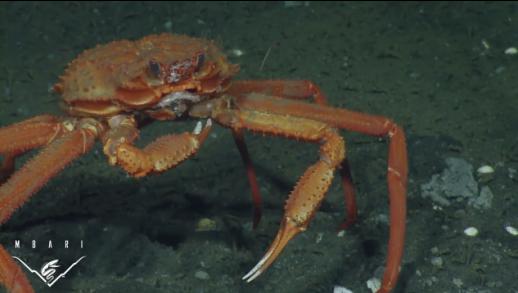 MBARI research technician Peter Walz explains that the deep-sea crab's "methane mustache" was the result of the chilly temperature and high pressure that takes place about 4,130 feet (1,260 feet) below sea level. Once the methane gas seeps out, the bubbles form a frozen skin called methane hydrate with the gas still trapped inside.
"It was pretty obvious that the crab was intent on going to the gas vent, but we had no idea what he was going to do or why. The crab was doing his own investigation of what we were investigating"
The takeaway from this story is if you have no idea what you're dealing with, don't even think about putting it in your mouth.