Every year, BMW always come up with exciting new models and innovations to tease us into selling our cars and buying theirs! The German car maker never sells anything that turns out to be a flop in the motoring world. Just look at what they’ve done with the MINI!

One new model under the BMW badge that might interest you is the new 2 Series Convertible. It’s the latest vehicle to wear that familiar front bumper kidney grille with pride. I know that the last thing you want to do is buy a convertible in the middle of winter. Which is why BMW is planning to sell this new model from spring 2015 onwards! 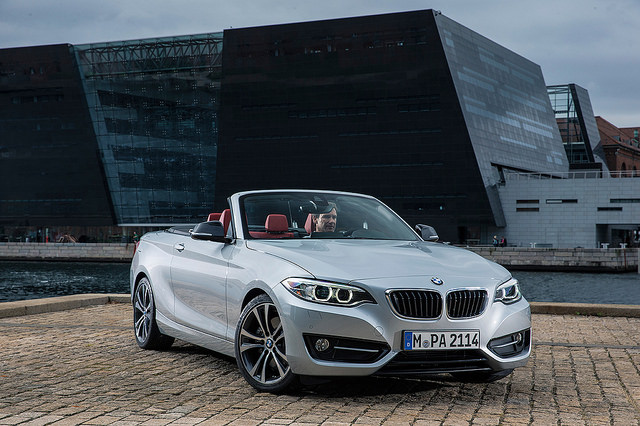 Here is what we know so far about the new BMW 2 Series Convertible.

BMW’s model rationalization is as follows. Odd numbers for four-door sedans, even numbers for two-door models. As this particular model is a convertible, it falls under the even number category.

The new 2 Series Coupe first got unveiled at the 2014 Detroit Motor Show. It gave people a taste of what the Convertible might look like when it enters production. We now have confirmation from BMW themselves that the Convertible is here and ready for sale from this month onwards.

BMW say that the new 2 Series Convertible builds on the success of the “world’s most popular open-top premium model.” So, what can we expect from this new model?

The German car maker made sure the new model is larger and better than the one it replaces - the old 1 Series Convertible. It is 72 mm longer, 26 mm wider, and the wheelbase got extended by 30 mm.

That means there is more space inside the car itself. For example, in the luggage compartment, the volume is 335 litres. That’s over 30 litres more than the 1 Series Convertible. BMW say that the rear passengers can get out of this new model easier. It’s what they call “optimised entry and exit comfort” for the people sitting at the back.

According to A1 Carriages, it’s easier to load stuff from the luggage compartment through to the cabin area. That’s good news if you have a set of skis, for instance…

It has a new electric hood

BMW said the fabric hood on the new 2 Series Convertible is one that they have just developed. It comes with extra insulation, which is useful for keeping out road noise. They say you can open and close the hood in just twenty seconds with the push of a button in the cabin.

Unlike some cars, you can operate the hood if you are driving at speeds of up to 30 mph. When you spec a new 2 Series Convertible, you have the choice of three colours. Black, Anthracite (with silver effect) and Brown (also with silver effect). The black hood is standard across the model range.

It has a swish interior

One of the downsides to owning BMW cars in the past is that their interiors were quite dull and “cold.” Their flagship models are all aimed at business users, so it’s perhaps no surprise. It’s refreshing to learn that the interior in the BMW 2 Series Convertible looks amazing!

BMW say that it has a “boat deck” inspired look thanks to the car’s exterior styling. The dashboard got designed to with the needs of the driver in mind. There are some small touches made to the dashboard that I find quite nice.

For example, the centre console has a high-gloss back surface where the HVAC controls are. And the air vents have chrome surrounds. 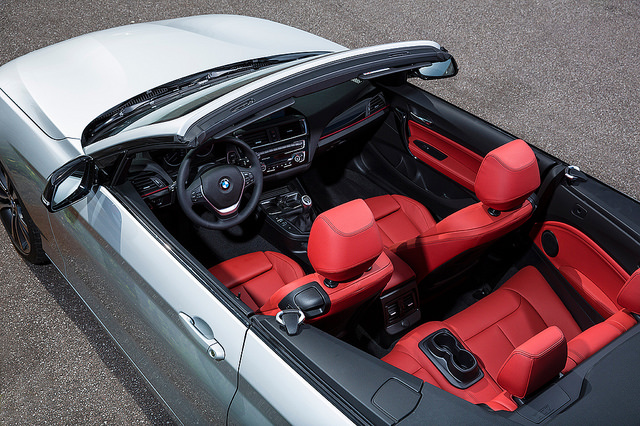 The new BMW 2 Series Convertible is 20% more rigid than its predecessor. That’s thanks, in part, to the car’s aerodynamics and optimised weight distribution. BMW have done a lot of work to make sure this convertible is as “safe as houses.”

You’ll be quite pleased to note that Euro NCAP have awarded this new model five out of five stars in its safety testing. Other safety features include extensive occupant protection and front and side airbags. The active bonnet ensures pedestrian protection too.

There are eight different model variants

If you would like to get behind the wheel of a new BMW 2 Series Convertible, you’ve got eight different model variants to choose from. They are as follows:

It features the latest tech innovations

BMW are no stranger to incorporating the latest technology in their cars. The new 2 Series Convertibles comes with a plethora of tech to satisfy gadget geeks everywhere! For instance, on some variants you can get electronically-controlled suspension.

In the cabin, you can enjoy using the infotainment system that makes use of the BMW iDrive system. The climate control systems come with a “convertible mode.” Even the leather seats make use of technology too!

That’s because they feature something called “SunReflective technology.” In a nutshell, it helps to prevent the seats from reaching temperatures you might experience if you were flying close to the sun!

For those that like to gas on the phone while they drive, they can do so within the law by using the hands-free smartphone facility.

﻿
Advantages of Reservation on a Party Bus