Car enthusiasts and ordinary motorists alike know how iconic the Ford Mustang is. The popular sports car began production back in 1964 and is currently in its fifth generation.

The Ford Motor Company made a recent announcement on their website. They said that the sixth-generation model will start in 2015!

It’s a long-awaited replacement for the current generation. Ford first unveiled the new generation Mustang back in 2013, at several same-day events across the world. 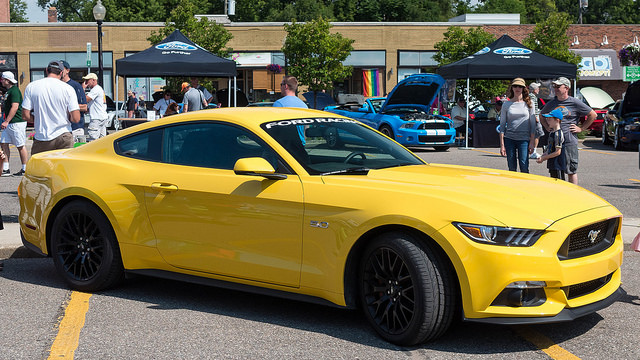 Are you hungry to learn more about the next model in line for the Mustang throne? Here is what we know on the new 2015 Ford Mustang.

For the first time, Ford are producing right-hand drive versions of the new generation Mustang pony car! The US automaker says that this is a first in the car’s 50-year history.

The right-hand drive versions will cater for the UK, South African and Australian markets. They will also cater for 22 other markets.

Given that the United States is Ford’s home, the new Mustang will sell over here first this fall.

It is a car that will get sold in 120 countries in total, but us Americans can take advantage of the fact that we can get it first!

An upgraded 435 brake horsepower V8 motor comes as standard in the new Ford Mustang. But there are some other engines to suit different lifestyle choices, according to Bob from Jay New Nelson.

If you don’t like the idea of driving your new ‘stang with a 5.0-liter V8 under the hood, you can also choose from the following engines:

In 2013, the Flat Rock assembly line built its 1 millionth Ford Mustang! That could not have been made possible were it not for the investment Ford has made into the production center.

Over $555 million dollars got invested. The money helped transform and improve the Flat Rock facility into a state of the art car manufacturing center.

And the investment has been good for the local economy too. More than 3,000 employees work for Ford at the Flat Rock assembly line.

The eagle-eyed among you will also know that the Fusion is also built at Flat Rock too. But then the Mustang is a more-interesting car to talk about, don’t you think?

As I mentioned earlier, the new Ford Mustang will go on sale this fall in the United States. It is expected to hit Ford dealer showrooms across the world by 2015. Check out the Ford website for more details.

In the meantime, what are you waiting for? Go down to your local Ford dealer and pre-order one today!