The Syrian Electronic Army is striking hard. This time, is appears they may have got ahld of the New York Times' domain and rerouted it to one of its own sites. A Times spokesperson said soon after the outage that the trouble was "likely result of malicious external attack."

They are nonetheless continuing to publish stories under its bare IP address. 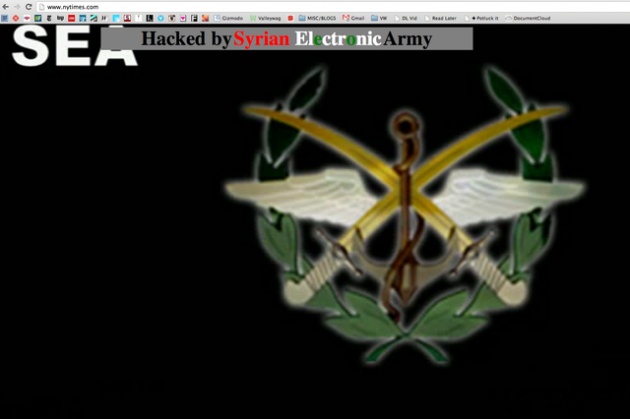 The Times continues to publish articles about the violence and injustice in Syria.
They also issued the following statement:
The New York Times Web site was unavailable to readers on Tuesday afternoon following an attack on the company’s domain name registrar, Melbourne IT. The attack also required employees of The Times to stop sending out sensitive e-mails.

Marc Frons, chief information officer for The New York Times Company, issued a statement at 4:20 p.m. warning employees that the disruption — which appeared to still be affecting the Web site as of 5:50 p.m. — was " the result of a malicious external attack by the Syrian Electronic Army “or someone trying very hard to be them.” He advised employees to “be careful when sending e-mail communications until this situation is resolved.”

Several people on Twitter said they believed it was the work of the Syrian Electronic Army, a group of hackers who support President Bahar al-Assad of Syria. Matt Johansen, head of the Threat Research Center at White Hat Security, posted on Twitter that he was directed to a Syrian Web domain when he tried to access The Times’s Web site.

Until now, The Times has been spared from being hacked by the Syrian Electronic Army, which has successfully disrupted the Web operations of news organizations like The Financial Times. On Aug. 15, the group hacked The Washington Post’s Web site through a third-party service provided by a company called Outbrain. At the time, the Syrian Electronic Army also tried to hack CNN. Some information security experts said the group also appeared to be ready to hack The New York Times Web site that day.

In a post on Twitter Tuesday afternoon, The Syrian Electronic Army also said it had hacked the administrative contact information for Twitter’s domain name registry records. According to the Whois.com lookup service, the Syrian Electronic Army was listed on the entries for Twitter’s administrative name, technical name and e-mail address.
﻿
What is the future of ipad app development