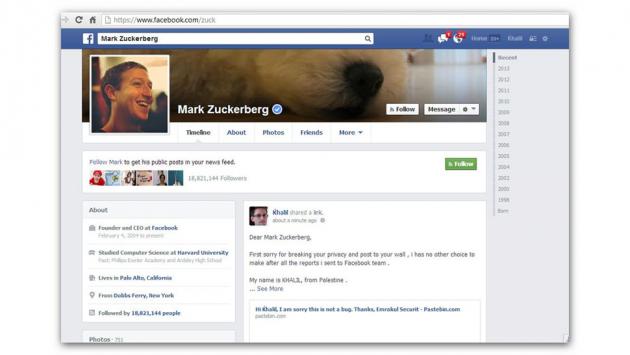 If you're going to challenge the internet to break your so-called foolproof system, you better put your money where your mouth is.

Khalil Shreateh is a Palestinian hacker who managed to identify a Facebook bug that let him post on Mark Zuckerberg's wall (see above). He was supposed to receive $500 for his efforts, but was denied of the reward as Facebook claimed he had violated its terms by "exploiting bugs to impact real users."

After the hacker community found out, they decided he indeed deserved to be compensated for beating the system. Security researcher Marc Maiffret set up a fundraising campaign on GoFundMe, and managed to successfully collect $10,000 in donations for Shreateh (which is a full 20 times more of what Facebook had initially offered, those cheapskates).

So why was Maiffret involved? Apparently he sympathized with this noble young upstart. Back when he was just a teen, Maiffret home was raided by the FBI over illegal hacking, although at that time he had no idea what the exact offense was. He explained to Bloomberg Businessweek:
I had honestly hacked everything from government systems to [Microsoft] to you name it, a good three years of hacking. These days there’s a much bigger allure, and if you’re getting into hacking and research, there are essentially two paths ahead of you.
[Bloomberg Businessweek]
﻿
What is the future of ipad app development