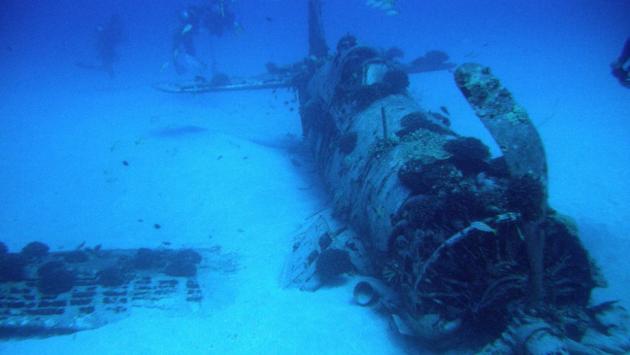 There are dozens of WWII pilots in the bottom of the ocean, some still inside the aircraft. While it's too late for a rescue, Pop Science explains the folks behind the BentProp project are surfacing these soldiers' incredible history.
Last year, local spear fishermen diving on Palau’s western barrier reef stumbled across one of the most impressive finds: an intact plane. They alerted the owner of a dive shop, who passed photos of the wreck along to BentProp. Scannon’s team eventually identified the plane as an American Corsair.

When [they] reach the Corsair, engineers lower the [autonomous underwater vehicle], now equipped with GoPro HERO3 HD cameras, into the water, and it once again begins a methodical sweep. Back in California, [the team] will use the thousands of captured images, plus hundreds of photos taken by human divers, to build a 3-D reconstruction of the plane.
BrentProp believes there are 8 US planes hidden in the corner of the ocean, and they use an autonomous underwater vehicle called "Remus" and they intend to find the rest. Check out more over at Popular Science: [Popular Science]

Image by Matt Kieffer/Creative Commons
﻿
What is Bitcoin Dust And how it can be Fatal?