After effects of quitting smoking for men

If you think about it, there are many new trends amongst the behavior and habits of men that have come up in 2019. For example, take a look at smoking, be it due to stress or due to the dire need to look cool, there has been an increase in the number of smokers across the world. Considering how every 5th adult in the world smokes, it is a cause of concern amidst the society. Smoking is not only injurious to the health of oneself, it also pollutes the environment, damages the lungs of others around a smoker apart from the known fact that it also causes a whole in one’s pocket. 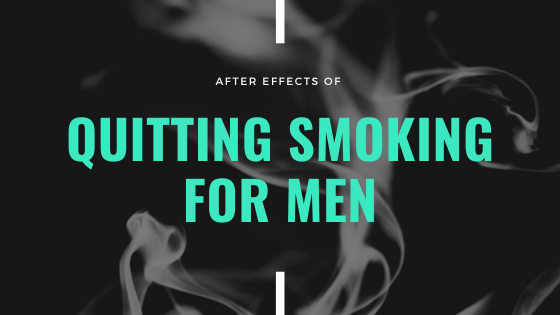 However, over time, the proportion of smokers has been falling. There might be a rise in the number of smokers, closing to 1 billion (as of 2017) due to a rise in population but if we look at the base data, it shows a positive direction. One major point to note is that men have been found more likely to smoke as compared to women and it is crucial for men to understand the beneficial changes that happen once they quit smoking. So here’s your dose of motivation to let go of that cancerous thing in your hand right now:
The first run
When a man initially cuts down on smoking, their heart rate starts coming back to normal, the oxygen levels regulate and the body gains stamina. With this, many men have seen to be experiencing erectile dysfunction or premature ejaculation due to lower blood supply to vessels after smoking over a long period of time which gets corrected once you quit smoking for about a week. Quitting smoking is the first and foremost step mentioned in ayurvedic treatments for PE. Smoking causes various sexual problems along with harming the lungs and the heart. However, once you decide to reduce your cigarette consumption, mucus clears from the lungs, your physical energy increases, the mind works faster and you can say bye-bye to nicotine within just two days.
Fighting depression
Smoking has often been preferred by the victims because allegedly it works as an antidepressant among smokers. It is analyzed that smokers use smoking as an escape route, an easy trick to fight back depression for a little amount of time. Smoking leads to the secretion of dopamine in the brain which causes a sense of pleasure but for a clinical patient suffering from depression, once the hormone wears off, the depression that comes back, it is way worse. Once you quit, there are high chances that the negative thoughts are going to cloud your brain and you need to work to fight it away.
Building the social circle
Smoking becomes an addiction quite easily, compelling you to spend blindly on cigarettes and not spend time with your wife at home, take breaks during work or find a side-spot in a party. As more and more people are gaining awareness about smoking, you won’t easily find anyone who appreciates a smoker, not even a smoker himself. This leads to loneliness and ignorance when you are with your friends or co-workers. After quitting though, you get to use all that time for some other productive work, be it a call or a meeting or even a quick coffee. It improves your relationship with yourself and others around you.
Work on Self-control
A man is often considered to be struggling with self-control, especially when he smokes. You lose out on money, have no control over finances, are judged by fellow teammates and let go of your own time. A cigarette controls where you want to go (will there be a smoke room?), who you talk to (will she mind talking to me if I smoke?) or what you buy (does this enough money in my wallet for a pack?). Quit smoking to take back what should be yours only, see self-control come back in your life and the improvements that follow.
Quitting a bad habit isn’t easy and will never be. However, the after-effects of quitting smoking are too amazing to ignore. Get help if you need, talk to somebody and sit down for some introspection. All it takes is one leap of faith to become better, get rid of that cigarette and improve your life in multiple ways.
Remember – Smoking kills, even if it’s just one per day.
﻿
Tips for Talking to Your Doctor About Sensitive Issues