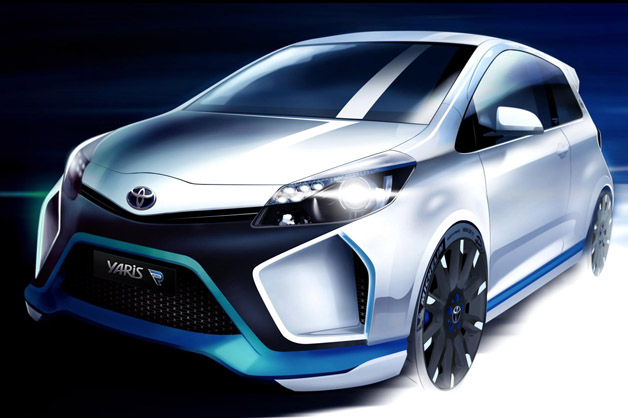 Toyota has definitely carved out a niche for itself in hybrid propulsion. Then ther's the Yaris Hybrid-R concept. Set to be showcased along with the rest of Toyota's hybrid and fuel-cell lineup in the upcoming Frankfurth Motor Show, the concept starts with one of the automaker's least exciting models and upgrades for more appeal.

It has slotted in a version of Toyota's new 1.6-liter Global Race Engine and paired it with a couple of electric motors for hybrid propulsion and through-the-road all-wheel drive. The Yaris Hybrid-R uses a super capacitor to store the regenerated brake energy and give it an upwards of 400 horsepower.

Toyota will bring together its past achievements and future plans for hybrid power in a Frankfurt motor show presentation devoted entirely to its industry-leading technology. Since it introduced the original Prius saloon in Japan in 1997, Toyota has sold more than 5.5 million hybrid vehicles world wide and continues to extend its portfolio, currently offering 23 models worldwide.

Frankfurt will mark the world debut of the new Yaris Hybrid-R concept, created as a showcase for possible future hybrid development ideas that can deliver greater performance and driver rewards.

Based on the three-door Yaris, Hybrid-R features a 1.6-litre GRE (Global Race Engine) developed by Toyota Motorsport, combined with two powerful electric motors that give the car intelligent all-wheel drive capability. Using technology like that featured in Toyota's TS030 Hybrid race car, energy recovered under braking is stored in a super capacitor, a unit that's particularly suitable for use in a sports car thanks to its high power density and quick charge and discharge speeds.

The result is a highly focused machine, designed to deliver the maximum driving pleasure, both on road and track.

Fuel cell technology: next steps towards the ultimate zero-emission car

Toyota will show the latest status of its Fuel Cell Hybrid Vehicle (FCHV) technology at Frankfurt, ahead of the market launch of a production car by 2015. Toyota considers the energy and emissions benefits make this the best technology yet to deliver the ultimate zero-emission car, with hydrogen as an ideal, ultra-clean energy source.

Toyota has been researching and developing environmentally efficient transport solutions for more than 40 years, building world leadership in the design and production of full hybrid powertrain technology.

It made the science a marketplace reality in 1997, when the first Prius went on sale in Japan. Since then, Toyota Motor Corporation has amassed sales of more than 5.5 million hybrids and today has a portfolio 23 different models – four times more than any other competitor – available in 80 countries and regions around the world.

Toyota calculates that its global hybrid fleet has already saved 12 billion litres of fuel and 34 million tonnes of CO2emissions, compared to the same number of equivalent, conventionally powered vehicles.

The story does not end here: by the end of 2015 Toyota will have introduced a further 16 new or revised hybrid models.

Toyota will host a press conference on its stand in Hall 8 at the Frankfurt motor show, at 12.45pm on Tuesday, 10 September.