The Audi R8 has always been a popular vehicle with the car-buying public. It’s elegant, sleek, and sophisticated - as you would expect from an Audi sportscar. But, as revealed at this year’s New York Motor Show, it’s just had an impressive upgrade. We thought we would take a closer look at the Audi R8 Spyder in all its glory - here’s everything you need to know. 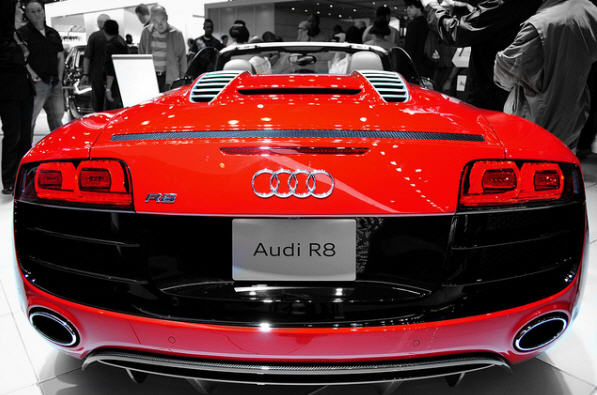 The New York Motor Show is always a big pull for car manufacturers keen to show off their latest wares. And, there will be some treats in store when the show opens to the public on the 25th March. Journalists and industry insiders have already had a good look at what is on offer, and the reports have been exciting reading. One of the highlights is, without a doubt, the Audi R8 Spyder.

Audi has taken the roof off their R8 sports car and made a few little changes here and there to come up with something wonderful. The R8 Spyder on show is the perfect colour combination of black, giving it a waspish appearance.

It certainly drives like a wasp, too. It can hit 198 mph - a little lower than its predecessor, but pacy enough to attract a lot of interest. Acceleration is impressive, too - you can get from 0-62mph in just over 3.5 seconds. Again, it’s a little slower than the coupe, due to the extra strength you need to compensate for the missing roof.

While we are on the subject of the roof, it’s close to a work of art. You can fold it back in less than twenty seconds at any speed up to around 31 mph. Hot, stuffy cars will be a thing of the past in the new Spyder - when you eventually get your hands on one.

For most of us, though, the R8 Spyder will be something to dream about rather than drive. At almost £130,000, it’s going to be well out of reach for the majority. Audi does a robust and broad range for most budgets - you can take a look at prices over at Spire Automotive. But, come autumn, when the Spyder is unleashed to the public, it’s going to be one of the priciest Audi cars out there.

Let’s not beat around the bush, though. You do get an awful lot for your money. As well as the incredible speed for a convertible, the noise the Spyder makes is amazing. The 5.2 litre 532 bhp V10 makes the kind of noise that turns heads for the right reasons. And, with the roof down, you will hear it in all its glory.

Music lover? Audi has you covered, too. There’s a Bang & Olufsen sound system in the back. And, of you have concerns of the engine drowning out your tunes, you don’t have to worry. There are speakers built into the headrests so that you will hear every note.

So, will the Spyder do the business for Audi? With all the first reports coming back positive, it’s looking likely. Watch this space for more details!
﻿
Shopping for the best auto parts to help you car enjoy a long life