Has Mercedes Made A Porsche?

Jeremy Clarkson reviewed the car on Top Gear and ever since the car has gone from strength to strength. The internet is now replete with rave reviews from practically every auto site. It's fair to say that this car has been something of a phenomenon. If only more of us mere mortals could afford one.

The new Mercedes GT is the first of Merced's cars to be produced entirely by AMG, it's in-house tuning department. And boy, does it show! AMG has always been about high performance and pushing big Mercedes to their limit. But AMG has always been constrained by Mercedes wider concerns. That is, they've always had to moderate their efforts in order to fulfil Mercedes' objective to appeal to the widest possible market.

Not so with the GT. AMG have been able to work without constraints on this car, and perhaps that's why the whole vehicle is such a cohesive masterpiece. From the styling to the performance, almost everybody who goes near one of these cars falls in love with it. It's not just that it has an engine that's made by AMG like other high performing Mercedes (think the SL). It's a true racing thoroughbred, made by a department of Mercedes obsessed and driven by performance. 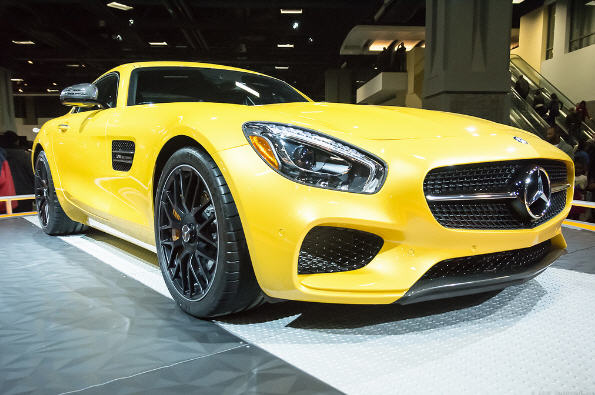 But is the new Mercedes essentially a Porsche? And more to the point, does it matter?

Like a Porsche, the view from the cockpit of the GT is dominated by its enormous bonnet. In fact, the bonnet is probably larger than any Porsche. The GT takes old fashioned front-engine performance to the next level. And like a Porsche, you're sitting low in the car. Really low.

That means that when you do push down on that throttle, you're in for a serious ride. The smaller of the two variants of the car, the AMG GT version, comes with a 456 bhp 4.0 litre V8 capable of 0-62mph in a mere 4 seconds. That's fast, but not as fast as the GT-S version of the car, which produces 503 bhp and rockets to 62mph in 3.8 seconds.

And when you consider that the car tops out at around 190 mph, the new Mercedes is certainly no slouch compared to a Porsche. In fact, it compares rather well to Porsche's own GTS 911 4.0 litre offering which itself reaches 62 in a dizzying 3.8 seconds.

But Mercedes have gone a step further here, even than Porsche. It's not so much about the performance overall, but the fact that AMG has injected their quality into every aspect of the car. It's the looks, the interior technology and the reliability.

All of these problem areas for high-performance cars shine for the GT. The design layout follows in the footsteps of the awesome 300SL gullwing, but it has a charm and a sleekness reminiscent of the Jaguar E-type. But thanks to AMG's rigorous testing, the car has far more reliability than these problem-prone vintage models. Each engine is handbuilt and meticulously inspected before being installed in any new car.