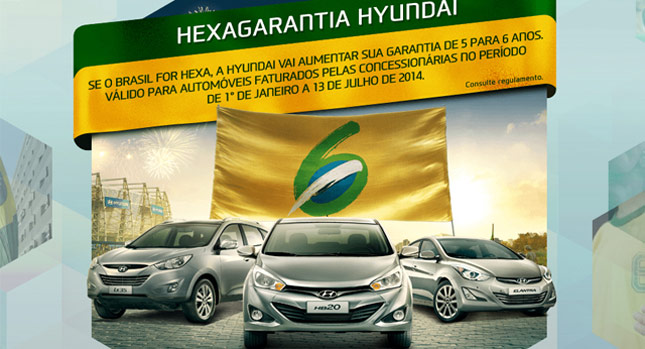 Hyundai's advertising campaign in Brazil is irritating Volkswagen, and the German automaker has contacted CBF, the country's soccer federation for clarification.

The body has already asked Hyundai to pull its “Hexagarantia Hyundai” campaign which promises an extra year's warranty to new car buyers in Brazil if the team wins the World Cup for a sixth time. The body argues that the campaign represents a misuse of the national team's intellectual property.

“Volkswagen Brasil is in contact with the CBF to clarify and resolve this issue,” VW told Bloomberg in an e-mailed statement. The automaker added it has been the automotive partner of the Brazilian team since 2009, which gives it exclusive rights to use the association in promotional activities and official communications.

Hyundai spokeswoman Meeyoung Song said the company isn’t commenting on the matter. The commercial was still available on its YouTube channel at the time this article was written and had garnered more than 1.27 million views. The promotion also has a dedicated website in Brazil.

As FIFA’s official sponsor, Hyundai is allowed to use branding associated with the World Cup, but the CBF says it can’t use references to the Brazil national team in its promotion.