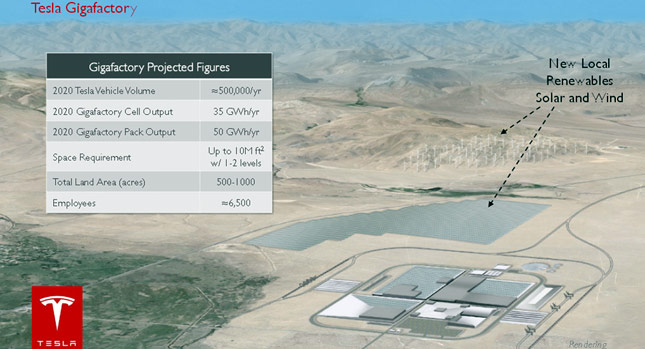 Plans for Tesla's "gigafactory" aren't new, but now there's more information about the project. The company will invest $5 billion in a large scale factory which would drive the cost of lithium-ion batteries down and allow the company to reach its goal of producing a mass market electric car in three years' time.

“We’re planning to build a large scale factory that will allow us to achieve economies of scale and minimize costs through innovative manufacturing, reduction of logistics waste, optimization of co-located processes and reduced overhead,” Tesla says in a press statement.

The Gigafactory is projected to produce 500,000 lithium-ion batteries annually, which is more than last year's overall global production of batteries. By the end of the first year of volume production, Tesla expects the Gigafactory to have driven down the per kWh cost of the battery by more than 30 percent.

The company says the plant will occupy up to 10 million sq-ft (929,030 square meters) and will hire approximately 6,500 people.

Battery packs will be sent to Tesla’s vehicle assembly plant in Fremont, California. Tesla will fund $2 billion (€1.46 billion) of the total investment, of which $1.6 billion will come from a bond issue.
﻿
Common summer car issues every car owner should be aware of