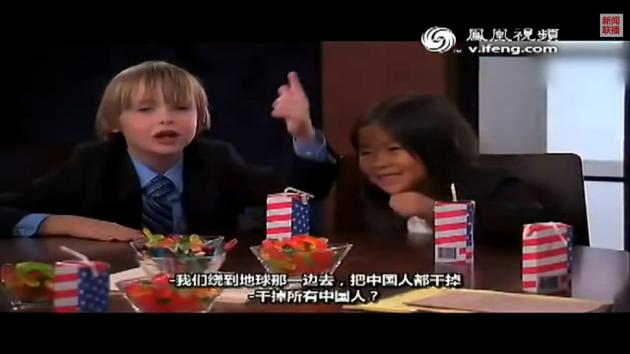 Anyone who has ever had a conversation with a kid no doubt knows that they say the darnest things. Unfortunately for Jimmy Kimmel, he learned this the hard way when one of the kids in his Live! skits ended up suggesting that the U.S. government "kill everyone in China."

The "Kids Table" skit featured a panel of children being asked about current events ranging from the government shutdown to how you spell Barack Obama. Around the 1:53 mark, Kimmel asked how the US should "pay China back" the $1.3 trillion it owes.

The way that little boy nonchalantly said that they should just "Kill everyone in China" sparked outrage, especially among members of the Chinese Americans community. Once the controversy made its way to the People's Republic, where Weibo users called for a mass protest to be held outside the San Francisco offices of ABC.

The threat was apparently enough to convince ABC to scrub the clip from YouTube and issue this formal apology:

"We would never purposefully broadcast anything to upset the Chinese community, Asian community, anyone of Chinese descent or any community at large...our objective is to entertain," said ABC executive VPs Lisa Berger and Tim McNeal in a letter to pan-Asian-American PAC the 80-20 Initiative."
We're betting that if Kimmel knew just how far that one childish comment would go, he would think twice about letting kids on his show.
﻿
The 5 most common mistakes when betting online