4 Ways To Dress For a Formal Event

Does Coffee Make You Happier And More Productive?

The Benefits of Going to an Autumn Camp

The Benefits of Going to an Autumn Camp Jun 24, 2021
LIFESTYLE  camp

When Minion Madness Took Over Malaysia: A Recap.

It feels like yesterday when the world was struck by "minion fever," - those little cylinder-shaped, mischievous characters from the animated film Despicable Me 2. The official toys would soon be flying off the shelves at toy stores all around the world. When McDonald's decided to offer these minions as part of their Happy Meal promo, things got more than a little out of hand. Guess the fast-food chain didn't take into account that some fans take their minion collection way too seriously. But why?! Why minions, and why now? What about these yellow things are so striking that it stirs out the inner warrior in people?

Even our Singaporean neighbours were struck by minion fever:

Here's what some of those who waited in line did to pass the time:

But once those doors finally opened, Malaysian mentality quickly took over:

Some "adults" were even reduced to fighting with staff just to get their hands on these plastic figurines:

What's really infuriating is that there were reports that some customers were chucking away their Happy Meals as soon as they got their hands on the toys. What a waste. Fortunately, a group of inspired youths from Creative Juice Kuala Lumpur decided to set up a campaign to get people to donate those unwanted meals to the needy. The minion madness didn't end there. When the free minion toys were official sold out, it didn't take long for internet dealers to auction the toys off on ebay at ridiculously high prices. 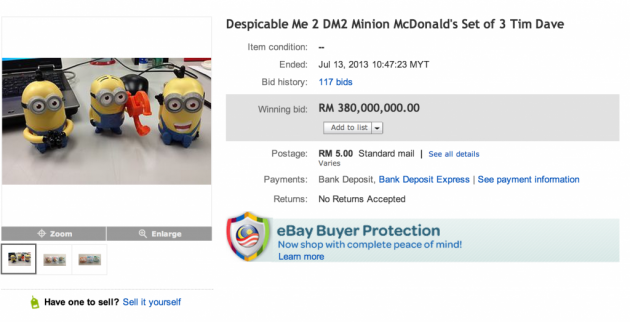 WTF! Seriously, WTF! Who would have thought that these yellow figurines could easily bring out the despicable side in people?  While the toys are definitely cute, we just can't fanthom how owning a bunch of plastic (that was probably made in China) is worth all this trouble. Is it the thrill of getting something for cheap? Or was the movie was really THAT inspiring that people felt the need to adopt the minions?

It's not like you couldn't get these toys from the stores - we're talking official plush toys - toys you can cuddle with or decorate your *shudder* bed with. We won't judge you for being a 25-year old minion hugger.

Now that the minion craze is over, what do you think the next insane Happy Meal toy fiasco will be?

﻿
4 Ways To Dress For a Formal Event

There are several occasions when we are invited to a formal event. All our colleagues and clients might be there at that event. Since it is a formal event, it is essential to dress in a similar manner. Other informal dresses look great but they would not work at an informal event. If you do not have enough formal dresses, you must look where to buy formal dresses in Brisbane. These formal dresses will create a great impression in front of the people of your profession. Here are some other ways to dress for a formal event.  Read more
LIFESTYLE  dress Jun 25, 2021 12:26
8 Eye Care Tips For Optimal Health

If you are an avid blog reader, your likelihood of coming across skincare tips is significantly high. Most bloggers will create posts that highlight hand and feet care, never taking the time to enlighten people on how to take care of their eyes.  Read more
LIFESTYLE  Optimal Health Jun 24, 2021 15:19
Top Benefits of Buying Jewellery Online

Online shopping is continuing to gain popularity with each passing day. It comes with a wide range of benefits. For instance, it is very convenient. You can order any product you want and make payments from the comfort of your home using a PC, laptop, tablet, or smartphone. Online shopping has also hit the fashion jewellery industry. Consumers can now buy pieces of jewellery of their choice from an online store without any hassle.  Read more
LIFESTYLE  Jewellery Online Jun 24, 2021 15:14
More Stories >