Robin Thicke's Wife Was 'Chill' With His Ass-Grabbing Antics 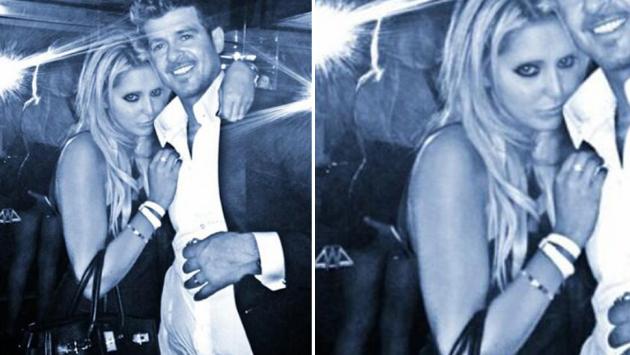 If you want to marry Robin Thicke, then you'll have to accept his flirty ways. According to Lana Scolaro i.e. the 20-year-old he played grab-ass with at a post-VMA party, Thicke was doing all that while his wife Paula Patton was just a few feet away. And apparently he likes them young. Life & Style reports:
“I don’t think he cared what she thought,”  “I was with him the whole night!” The two had met the week before at a friend’s party, and she says he immediately approached her at the 1Oak VMAs shindig with the pick-up line, “I just love the fact that you’re so young."
And that's not all that happened. Thicke also encouraged Scolaro to talk to Patton, saying that she was "chill" with whatever. And then he waited for her to come out of the bathroom before making a move.
“I went to the bathroom, and when I came out he was standing there,” she tells Life & Style. “He turned off the lights so no one could see us, and he started making out with me. He was grabbing me. He was like, ‘I want to get you into bed!’”
Apparently, nothing else really happened but Thicke reportedly got her number when the party broke up at 8 AM. We can only guess that if Thicke thinks it's okay to do this in front of his wife, then he should be okay with Patton doing the same thing to him as well.
﻿
8 Ways to Gain More Body Confidence