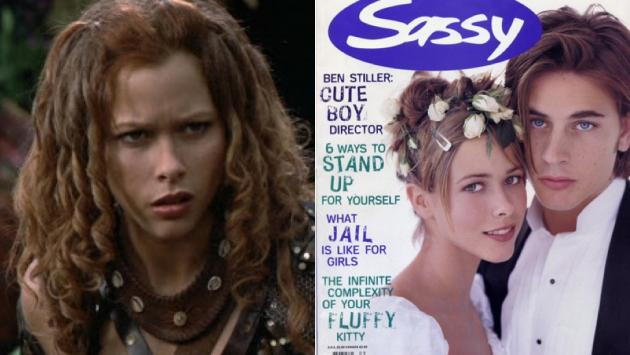 Add this to the list of stories about how the fashion world exploits young and naive models. Jennifer Sky is a model-actress who was best known for her role as Amarice on Xena: Warrior Princess. And she claims that she would rather kick butt on TV than sashay down the runway.

Last week, Sky wrote a piece for New York magazine entitled "Working As a Teenage Model Gave Me PTSD." The piece describes the systematic and endemic practices young models face when they are naive and can't question if the treatment they're dealing with is right or wrong:

Countless questionable things happened to me during my time as a model. From neglect to molestation to topless photo shoots to men exposing themselves to being made to stand in a freezing pool until I turned blue, I would be abused for the entirety of my career. Eventually, the highs of the photo shoots began to dull. I started to show signs that things weren’t right; feeling disconnected, hollow, having nightmares. My naturally outgoing personality changed: I became withdrawn and startled easily. It became hard for me to travel new routes, to eat at new restaurants, or even shop at the corner store. I became so timid I no longer spoke. I eventually did not leave my room unless I had a job or a casting.

According to the actress, the biggest difference between the two professions "is that actors have a union and models do not." She eventually quit modeling after posing for the prom issue of Sassy magazine. She describes her time on Xena as "feminism at work" because it was a show "with female lead characters who were unapologetically powerful and sexy":

I haven’t done any acting in a few years, but I carry Xena’s lessons forward. And I never forget how much we all need our heroes and heroines, our mythical gods, our warrior princesses. For all its pomp and glamour, the fashion industry was never able to give me that kind of hope.