How Disney's New Rendering Technique Will Benefit The Animation Industry

A team led by Disney Research Zürich has developed a computational algorithm that can reduce rendering times for such scenes by a factor of up to 1,000.  Led by Disney Research scientist Wojciech Jarosz, the team developed a method called "joint importance sampling" that efficiently identifies which paths of light are most likely to contribute to what the camera actually sees.
"There's always going to be noise," said Jarosz in a statement, "but with our method, we can reduce the noise much more quickly, which can translate into savings of time, computer processing and ultimately money."

"Faster renderings allow our artists to focus on the creative process instead of waiting on the computer to finish," Jarosz explains. "This leaves more time for them to create beautiful imagery that helps create an engaging story."
This new algorithm will sort out which paths to include and exclude when rendering the final scene. The researchers believe this will help boost efficiency by reducing rendering times while improving animation quality. 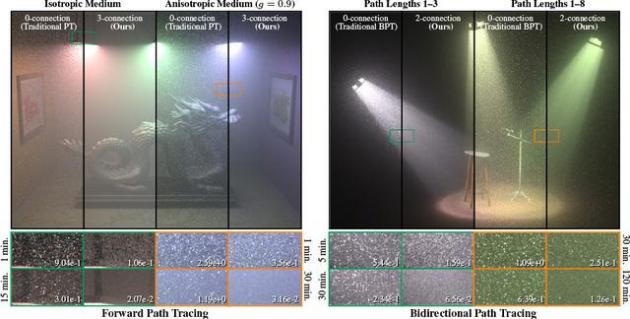 Shown above are the results of the team's joint importance sampling method is contrasted with traditional techniques for both unidirectional and bidirectional path tracing. The boxes along the bottom of the images show close-up views of the scene. The relative lack of noise highlights the improved accuracy of Jarosz's team's sampling method. For more information, you can visit the team's research page here.
﻿
3 Top Secrets Apple Doesn't Want You to Know