Vancouver Bans Doorknobs And This Isn't a Sexual Reference

The doorknob may be the most inefficient solution to opening a door. And it's about to get banned in Vancouver.

The city's council amended its building code, to mandate lever handles and lever faucets only. And this makes total sense.

As Tim Stainton, a professor and director of the School of Social Work at the University of B.C., told the Vancouver Sun:
Basically, the idea is that you try to make environments that are as universally usable by any part of the population. The old model was adaptation, or adapted design. You took a space and you adapted for use of the person with a disability. What universal design says is let's turn it around and let's just build everything so it is as usable by the largest segments of the population as possible.

A really simple version is the cut curbs on every corner. That helps elderly people, people with visual impairments, moms with strollers. It makes a sidewalk that could otherwise be difficult for parts of the population universally accessible.
It is true that the door knob isn't quite the most accessible utility. Can people with carpal tunnel open a door knob? It's tough. Serious. The better option would be the lever. 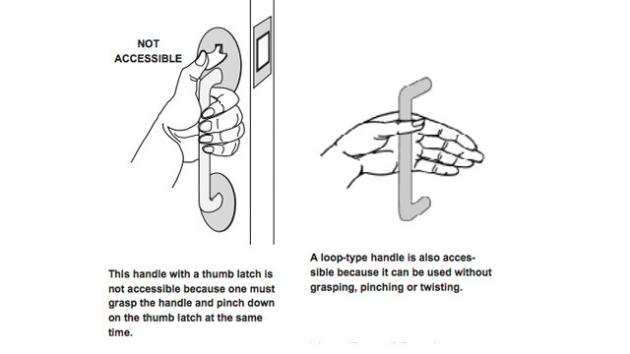 One day, the doorknob will be ancient history. And that's not very far away either. [The Vancouver Sun, ADA.gov]
﻿
3 Top Secrets Apple Doesn't Want You to Know