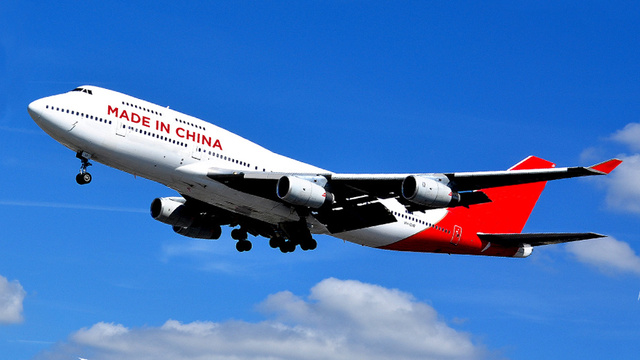 Not wanting to stop at copying cities, Chinese manufacturers are now copying airplanes. They are bootlegging Boeing 747s.

Of course, nothing can compare to China creating a version of Paris and Venice, and plane copy isn't something new for their aerospace industry. In late 1990s, the Chinese military used salvaged pieces of a downed stealth bomber to build their own Chengdu J-20, an eerily similar twin to the American F-117 Nighthawk.

Now they're looking to fly commercial. Newsweek reporter Hugh Gallagher talks about meeting a pilot who was hired to fly a Boeing copy to a remote Chinese airline hangar:
Inside were eight planes. They were green—the metal looks like that on unpainted jets, bought factory fresh from Boeing. Four of these planes were intact, but the rest were meticulously dismantled into a universe of pieces spread in vast spirals that disappeared into the distant immensity of the hangar. The imported Singaporean metallurgist jumped out to join the Chinese engineers busily bootlegging away. Armed with protractors, rulers, clipboards, and smartphones, this minor army of reverse-engineering geniuses was measuring the dissected planes, right down to the length and thickness of screws.
What won't China copy?

[Newsweek]
﻿
An Analysis of Fifteen Exceptional Alternatives for the Video Game Diablo 2: Resurrected