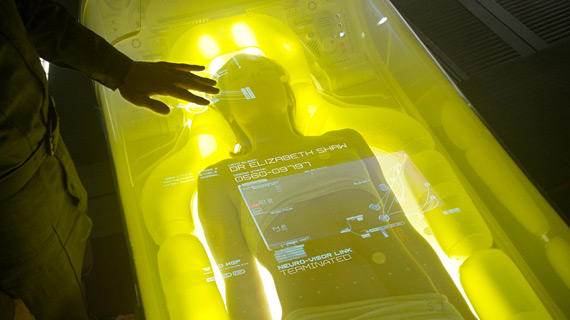 Will we ever be able to send astronauts further into space? How do we get them to live on a spaceship for six months without growing crazy?

The answer: put them to sleep. Scientists have been exploring various ways to get astronauts to hibernate on the way to Mars. It is indeed a huge challenge. Sleeping has its complications. For one, you'll need to ensure they get fed and hydrated while they are sleeping. And then, you'll need to figure out how to keep their muscles from atrophying and prevent bone loss from extended stay in zero gravity.

Here are some of the ideas.

One of the ideas is to induce a state of therapeutic hypothermia. They would drop the astronauts' body temperatures to consume less energy. John Bradford, who's been working on the hibernation problem about benefits, explained that for every single degree of body temperature drop, its metabolic rate drops 5 to 7 percent. Researchers hope to get a 10 degree drop which would mean a 50 to 70 percent reduction in metabolic rate.

"We're not freezing anybody," said Bradford. "It's not cryopreservation; it's closer to hibernation. So they're still breathing, and they still need sustenance." Astronauts will still need life support, so they would be hooked up to breathing machines and food delivered through an IV.

For the moment, the current record keeping a human in an induced hypothermic torpor is ten days. NASA is hoping to boos that to six to nine months, just enough for a trip to Mars.

Pump Them Full of Drugs

Scientists explored the possibility of hibernation and focused on a number of drugs that could induce the sleeping state. One of it was known as DADLE (d-ala d-leu-enkerphalin).

Scientists were able to put ground squirrels to sleep using the drug during the summer months and saw no adverse side effects when they woke up again.

However, using a drug like that on humans is more complicated. Scientists remain optimistic since DADLE resembles the checmicals found in hibernating animals like bears.

"The molecule DADLE is similar to others we have in the human brain and resembles one of the hibernation triggering proteins in hibernators," said Prof. Marco Biggiogera a few years ago on behalf of the European Space Agency. "It can reduce the energy required by cells, whether isolated in cultures, or present in other animals or organisms."

Will they be able to accomplish such a feat? Or will the warp drive be invented before then?  [Space.com, Nature, NASA, The Guardian, Twitter / @bethbeck]
﻿
What is the future of ipad app development