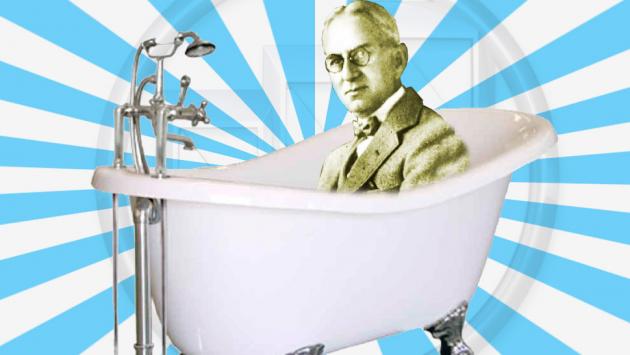 The world wouldn't have white bathtubs if it were not for a David Dunbar Buick. He's also the guy behind Buick. As GM tells says:
Around 1895, David Buick developed an interest in automobiles and the gasoline internal combustion engine. This interest led him to sell the profitable Buick & Sherwood Manufacturing Company in 1899 to the Standard Sanitary Manufacturing Company of Pittsburg for the sum of $100,000. With his half of the sale, Buick started the Buick Auto-Vim and Power Company in order to further his quest to improve upon conventional L-head internal combustion engine design. It was at Auto-Vim that Buick and fellow engineer Walter Marr developed the valve-in-head (or overhead valve) engine and the first prototype Buick motor car.
Buick was a gifted engineer, but a lousy businessman. He went into dept, and sold companies to get out of it, until William Crapo Durant bought the company and utilized it to form General Motors. Buick himself didn't fare nearly as well as the cars that bore his name, eventually dying broke:
David Dunbar Buick died penniless on March 3, 1929 at Harper Hospital in Detroit. But his obituary maintains that he was not bitter over his lost fortune nor was he envious of those who gained fame because of his contributions to the advancement of the automobile. Buick told an interviewer in 1928 that “Success consists in looking ahead and forgetting the past. I just got a few bad breaks. Anyway, money is useless, except to give one mental security.”
[GM Heritage, Review-Journal, Wikipedia]
﻿
Shopping for the best auto parts to help you car enjoy a long life