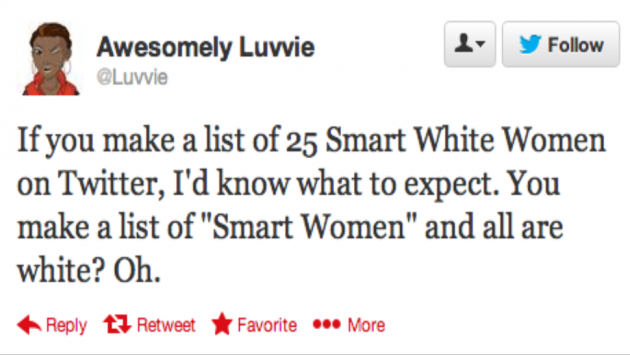 Fast Company posted a list entitled "25 Of The Smartest Women On Twitter." recently. The list didn't include a single black woman, and guess what happened next? Internet explosion!

"As a woman CEO who writes about women in leadership, I’m frequently looking to make connections with other women on Twitter," BRANDfog founder Ann Charles wrote, adding that they were "drawn from a wide spectrum of industries, professions, and geographies." What about the color spectrum?

Fast Company issued a formal response today:
There was some appropriate criticism about who was missing ("Spoiler alert: not one Black woman," one Twitter user sharply, correctly noted). And we followed closely as the whole thing morphed into hashtags, including #SmartBlackWomenOfTwitter and #SmartLatinaWomenOfTwitter. You'll find a treasure trove of big thinkers and innovators to follow there. We consider ourselves lucky to have an engaged audience who calls it like they see it (or don't see it in this case).

We're big believers in the idea that the future of business looks a lot less like Steve Ballmer and a lot more like Kelvin Doe, Yvonne Greenstreet, and Reshma Saujani. That idea is reflected in our annual lists, including Most Innovative Companies and Most Creative People. We squandered the opportunity to do the same with our initial Twitter list.
﻿
Where to buy pen collections?