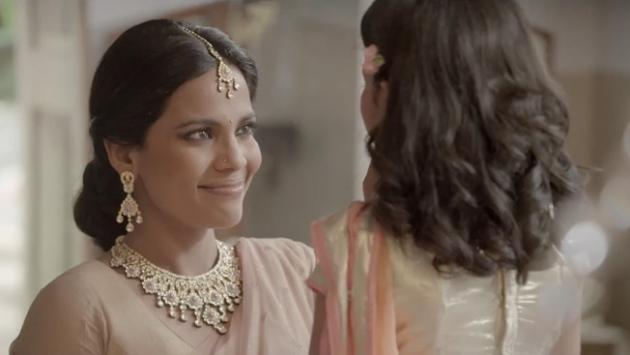 The above commercial for Tanishq jewelry seems fairly ordinary by most standards. But in India, where the ad is airing, it's reportedly causing a stir in a good way.

Ad Week explains more on why this ad is being hailed as a real game-changer in the country:

In a nation where widowed and divorced women have historically been treated as outcasts, the theme of the spot—a woman's second marriage, to a man who treats both her and her daughter with love and respect—is not only revolutionary. It is crazy bold.

Adding more fuel to the fire, agency Lowe Lintas chose a lovely model whose skin tone is apparently "duskier" than that of most advertising brides. So, not only can you find happiness in your second marriage, you can find happiness regardless of your skin tone (the makeup people aren't going to like that!). Arun Iyer, national creative director at Lowe Lintas, explained to Livemint that that the casting was everything in this ad, saying "it had to look like a marriage of equals, not something that was done out of pity." From that, I learned that the social status of a widow is such that people seeing the ad might automatically think someone was marrying her out of pity.
Hopefully, other companies will start following in this ad's footsteps by challenging viewers to rethink their own prejudices.
﻿
Discover the Best Swimwear for 2022