Let This Bionic Tortoise Wheel Its Way To Your Heart [VIDEO] 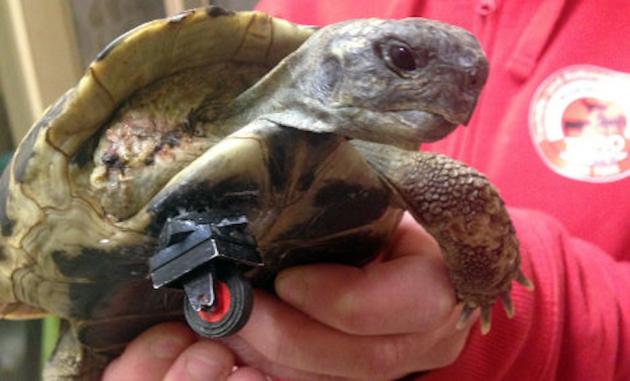 Little Schildi's story is an inspiring one. He fell into the hands of German vets after being abandoned and losing a leg. Instead of sending Schildi to the giant pond in the sky, they decided to turn him into a better, stronger, faster tortoise. 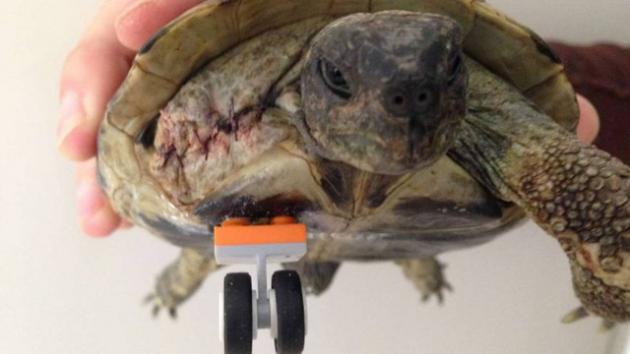 Dr. Panagiotis Azmanis who works at a veterinary clinic in Achern am Baden, got the parts by raiding the toy box belonging to his clinic manager's daughter.

The doctor then used a special surgical glue to stick the base block to Schildi's shell and adding superglue to connect the corners of the block:
"After that we could add blocks to achieve the correct height," he said. And now the single wheel has proven to be successful, Schildi has been taken back to the animal shelter. "We will see him again once in a while for check-ups," Azmanis said. "If he gets a 'flat tyre' it will be a simple matter to replace the wheel. They move around quite a lot so I'd expect to see him for a new wheel about once a year."
"First we fitted a double wheel but it was difficult for him to turn corners so we replaced it with a single wheel and that is much better for him," Dr Panagiotis Azmanis told The Local. Initially though the focus was on saving the tortoise's life. "He was in pretty bad shape when they brought him to us. The lower part of his front leg was missing, and the upper part was very bad, with bone showing, and maggots in necrotic flesh."
So remember, even if you're having a crappy day, knowing that there's a turtle somewhere out there wheeling himself around the world is sure to still bring a smile to your face.