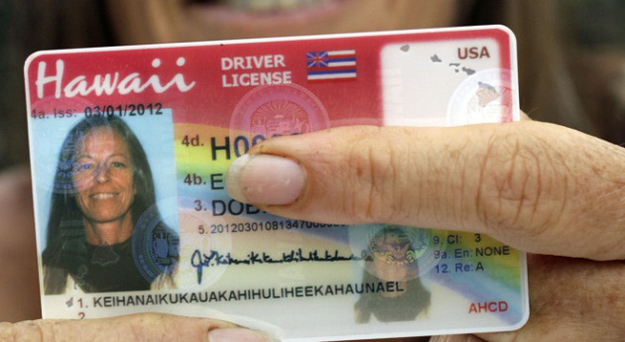 In September news that Janice Keihanaikukauakahihuliheekahaunaele was told to trim her last name so it could fit on her driver's license went viral. Following that, the Department of Transportation agreed to extend the character count to accommodate her name, and on December 30, the Hawaii resident finally received her new license.

Her last name is made up of 36 characters. Her old license didn't feature her first or middle name and dropped the 36th character of her last name, which caused problems when she traveled, and caused confusion when she was being quesitoned by a police officer during a traffic stop.

So after the news went viral, the Department of Transportation extended the limit to 40 characters for last names, 40 for first names, and 35 for middle names.

And if you're curious to hear how her last name sounds, listen to Janice Keihanaikukauakahihuliheekahaunaele pronounce it in the audio clip below:


Keihanaikukauakahihuliheekahaunaele said the Department of Transportation suggested in September she take her maiden name or shorten her last name. But that would mean taking away something she still has from her husband, who passed away.

“And I went, ‘How disrespectful of the Hawaiian people,’” Keihanaikukauakahihuliheekahaunaele said to KHON2 News.

In an email sent to the Lee Valley tool company in 1999, she explained that her husband’s whole name was Keihanaikukauakahihuliheekahaunaele. He didn’t have a first, middle, or last name and he never wanted to change it to fit in.