The Mini Dress That Every Woman Should Own Oct 24, 2020
FASHIONSHOW  Mini Dress

Trend-ology, an exhibit at the Museum of FIT, goes through a decade-by-decade chronology, featuring 100 glorious ensembles from brands like Christian Dior, Oscar de la Renta, Chanel, Rodarte, and Christian Lacroix, along with other highlights of the biggest fashion trends throughout the years. 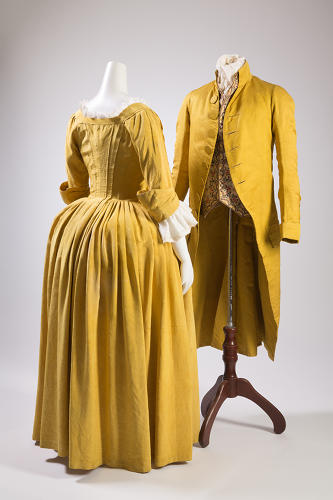 In the past, if you wanted a larger bum, you would turn to contraptions worn under the skirts: the pannier, the farthingale, the crinoline, and the bustle. Trend-ology features a bright yellow silk faille dress from 1770 with a huge pannier.

Women of today are still wearing bodyshaping tools to keep their bodies and posture in shape - Spanx, our modern day corset. But from then until now, women complain about the pain they go through to look good. Camouflage has made a comeback on the runway and on ready-to-wear racks, but the design is a century old, starting with uniforms and military trucks during World War I to blend into natural environments. It was first employed by French military units called "camoufleurs" in 1914.

Couturiers used the print to inject edginess into feminine cuts. An example is seen in a Vera Maxwell camo sportswear dress from 1974 and Claude Sabbah’s 2001 “God is Camouflage in the Seventh Year Itch Dress,” exhibited in Trend-ology. The longevity of camouflage is proof that while some trends are short-lived, others continually resurface and evolve. Tartan and plaid prints, too, have come in and out of style for over a century. 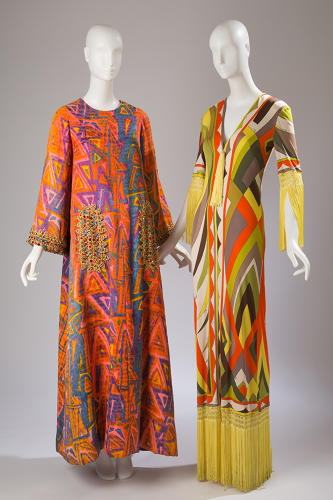 Orientalism was popularized by designers like Paul Poiret in the first decade of the 20th century. Poiret drew inspiration from decorative textiles exported from Turkey, China, and Japan. In the '60s, the rise of commercial air travel renewed the fascination with international fashions. Heavily branded apparel was hot in the '90s, taking consumerist pride to the next level. FIT showcases logo T-shirts, Versace's Medusa emblem on suits, and a bold necklace from Karl Lagerfeld's 1991 hip-hop collection, with CHANEL danging on a thick gold chain.

In reaction to the in=your-face luxury, designers like Calvin Klein, Prada and Helmut Lang, opted for minimalism in their collections. With chain giants such as Zara, H&M and Top Shop in every major city of the world, fashion trends are changing faster than ever. A season's runway styles influence these stores' mass-manufactured, affordable lines, and sometimes with couture designers in collaboration; for example Top Shop x Kate Moss, or Isabel Marant for H&M, and even Prabal Gurung for Target.

Trend-ology juxtaposes a “Rodarte for Target” sequined dress from 2009 against a runway piece from Rodarte’s Spring 2010 collection. The price differences reveal how inextricably tied up fashion still is with class and social status.

Also showcased is the current craze for luxury accessories, like the Louis Vuitton Speedy 30 bag on view currently goes for $3,000. ﻿
Bring a puppy home – help them adjust to their new home You decided to adopt a puppy, bought all the supplies they need and puppy-proofed your house to make sure they’re safe. Now you can bring them home, and you’re excited and eager because you want to spend time together. But it would help if you also tried to imagine what coming to your house means for them. The process may be scary because you take them from their family and bring them into a new environment where they know no one. They are afraid and confused, and you must help them adjust to their new house and life.   Read more
LIFESTYLE  pets Jan 19, 2021 23:14
7 Beauty Items Everyone Should Have in Their Home Want to reduce acne, prevent wrinkles, and add a glow to your face? Read this for a list of seven beauty items that can help you do all of those things!  Read more
LIFESTYLE  beauty Jan 05, 2021 20:22
Seven Ways to Manage Depression With Mindful Nutrition What we put in our bodies can be helpful or harmful to our mental state. If you're struggling with depression, why not try to help yourself out nutritionally?  Read more
LIFESTYLE  vitamins Jan 05, 2021 20:22
More Stories >