Other Than Likes and Followers, What Will Advertisers Get With Instagram Ads?

Have you seen any Instagram ads yet? It has been about a month since they first launched it. It turns out, the companies behind the ads have been reaping some benefit already.

But what is the value proposition here? Curalate is a company working with others who want to advertise on social media. They looked at five brands that were in Instagram's first push, and found that the paid ads were much more effective at attracting likes than the unsponsored posts by the same brands.

Take a look at the chart: 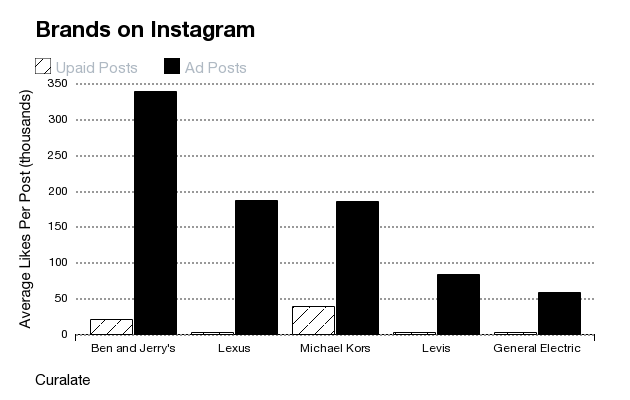 The question of course remains, how much are a few hundred thousand likes on Instagram worth and how many of them translate into sales.

According to Nitrogram, which gathers analytics on Instagram, Michael Kors gained an average of 54,000 followers in the 18 hours following each one of the company’s ads. ”If you have to do a little bit of advertising to get permission to engage, is it ultimately worth it?” says Apu Gupta, Curalate’s chief executive. “It may be.”

Instagram's ads don't offer a clear way to drive immediate sales, at least for now, but Emily White, Instagram’s director of business operations, said the value was somewhat unmeasurable, because the ads are more about branding than inspiring immediate transactions.

“There’s a lot of value in impressions and views that may not be captured in likes or comments,” she told Rebecca Lieb, an analyst at Altimeter, in October. “Instagram will guarantee a certain number of impressions initially, which will vary by campaign. This is a premium brand advertising product. Success is brand lift over a longer period of time.”

With brands getting increasingly fixated on sales leads over brand exposure, will Instagram be the platform for most?
﻿
An Analysis of Fifteen Exceptional Alternatives for the Video Game Diablo 2: Resurrected