The reasons why people practice meditation and mindfulness vary. If you ask a group of individuals why they do it, you won’t get any two responses that are the same. The calming nature of meditation means that it is a great way to cope with things that are beyond your control, but how this manifests itself is in the individual changes from person to person. 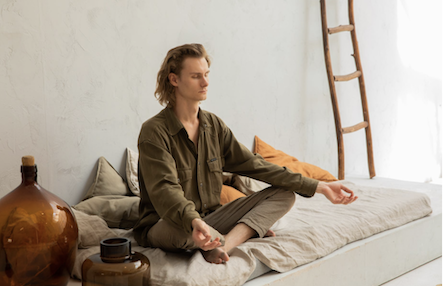 Though the practice of meditation and mindfulness has been around for years, it has grown in popularity massively in recent decades, prompting researchers to try and gain insight into what the actual benefits of this ancient practice are. By taking the time to study the benefits of meditation, there have been a number of discoveries that reveal that learning to pay attention to what our present experiences are and being able to calmly accept them without any kind of judgment, has led to us being able to live happier and healthier lives. There is a lot of evidence to suggest that it can impact our psychological well-being, as it’s proven to improve mood, increase positive emotions and decrease people’s chances of being susceptible to anxiety and depression.
That being said, what can mindfulness do for our bodies? Well, there is also some surprising research that has come out that states a lot of people who participate in frequent meditation and mindfulness can also reduce the amount of pain they feel, for instance if they suffer with chronic pain. Yes, there will certainly be an element of the psychological nature of mindfulness at play here, given chronic pain is usually the product of signals from the brain, but that doesn’t make the positive impacts any less impressive.
This article will discuss in more detail the actual benefits that the regular practice of mindfulness can have on people.
An Effective Treatment for Managing Chronic Pain
Millions of Americans live with chronic pain, which can usually be found in people’s joints. Those who do suffer with these issues will be aware of just how much of a burden they are. Persistent pain can alter a patient’s life as it can result in lack of sleep, discomfort and in some cases early retirement.
There are a lot of organizations out there that are able to help patients that suffer with chronic pain such as ChartSpan, which provides support to those who struggle with such pain, providing medication and treatment plans. Something that can be incorporated into those treatment plans is frequent meditation and mindfulness.
Scientists have taken the time to study the effect that meditation can have on pain and it has shown to be beneficial, a lot of the time, significantly so, although it may not cure it completely. Studies show that when people meditate, they are activating and reinforcing some areas of the brain that are often used in pain processing, essentially helping to reduce pain intensity.
Mindfulness Can Be Good for Our Hearts
Heart disease remains one of the leading killers in the United States as it accounts for roughly around one in four deaths every year. As such, anything that decreases the risks and symptoms of heart disease is something that would significantly impact the overall health of society. Enter mindfulness.
Studies have shown that people with pre-hypertension that engage in a course of mindfulness and meditation see significantly greater reductions in their systolic and diastolic blood pressure than people who engaged with another treatment. The other treatment in question was progressive muscle relaxation. This clearly suggests that mindfulness is a great way to reduce the risk of serious illness for those who are susceptible to heart disease as it brings down blood pressure.
Engaging in Mindfulness Can Help to Reduce Psychological Pain
Of course, the physical benefits of engaging in mindfulness are massive, but it’s worth remembering that it can also impact our psychological well-being too, and this is one of the reasons that so many people opt to use it. There is a lot of research out there that suggests mindfulness is prevalent in reducing peoples stress, as they are made to engage internally when they meditate, which gives them a chance to overcome what it is that’s causing them stress. Even more research suggests that it can also assist people who have anxiety and depression, again, this links back to it being a partial cure to chronic conditions.
A good example of how this works is to think about people who have drug addictions. These, a lot of the time, stem from a craving for a substance that relieves people in a temporary state from their psychological suffering. Mindfulness can help people who suffer from these urges as they start to better understand and tolerate their cravings. It helps them avoid some kind of relapse after they have been away from drugs for a while, too, which is another benefit towards the regular practice of mindfulness.
Mindfulness Can Assist with Reducing Cell Aging
Cell aging is naturally occurring as it is the result of cells that repeatedly divide over a person’s lifespan. Cell aging is increased thanks to disease and stress. However, proteins known as telomeres (that are found at the end of chromosomes) serve to protect cells from aging and it turns out mindfulness can have an impact on them.
Recent studies have suggested that thanks to long-time mindfulness, meditators have longer telomeres. It was found that breast cancer survivors who went through MBSR preserved the length of their telomeres were longer than those who didn’t follow MBSR. That being said, this study hinted at correlation and didn’t prove causation.
On the other hand, there was another study that found differences in telomere activity (which is also related to cell aging), so it looks like there could be some kind of link. There was a 2018 review that concluded mindfulness training led to a definite increase in telomere activity, so this shows that mindfulness and a reduction in cell aging are most likely parallel to one another.
﻿
5 Ways Workout Tech Can Transform Your Fitness Routine