Louis Vuitton stylist Katie Grand shares with Grazia just how much effort went in to making the recent runway show such a train-stopping success. Apparently the train idea was born after she and Marc Jacobs decided to emphasize luggage this season, and they took further inspiration from the movie Murder on the Orient Express.

First there was the obstacle of having to cram all the models along with their enormous hats and feather-trimmed suitcases into the train itself. As a result, the show started four whole minutes late. From NY Mag:
At first, we had tried to get a real train in to the Louvre, but it was too heavy so it had to be built. They started work about a month ago.

It was the first time we haven't started the show two minutes early in quite a few seasons. Backstage, we were all completely frantic that we were running four minutes late, but I suppose that's how a lot of trains run!
The experience sounds like quite a hassle, so much so that they've revealed for next season, both the show and clothes will be a bit simpler:
We all think we might do a pale chiffon collection for summer with no embellishment or print!"
Facebook Twitter Google+
﻿
Here's Azealia Banks Looking 'Fierce' for ASOS (Video) 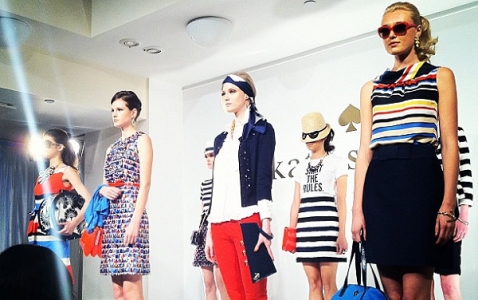